Secondhand vapor? Americans are split on public e-cigarette use

The e-cigarette industry is expected to clear $1 billion in 2013, and the success of the smokeless devices is reigniting the public smoking debate.

Although marketed as a healthier alternative to traditional tobacco products, e-cigarettes lack an FDA ruling that backs the claim. And while the secondhand vapor produced by the devices hasn’t been shown to be harmful, many believe welcoming e-cigarette use in public places would erode the decades of progress made in banning public smoking.

We at Upwave were curious to gauge public opinion on e-cigarettes, and whether the issue bears any relevance to the use of traditional tobacco products. So, we surveyed 4,880 Americans using our consumer survey tool, and asked if they approve of e-cigarette use in public places. We found that 29% approve, a nearly equal amount disapprove, and 41% are neutral on the matter: 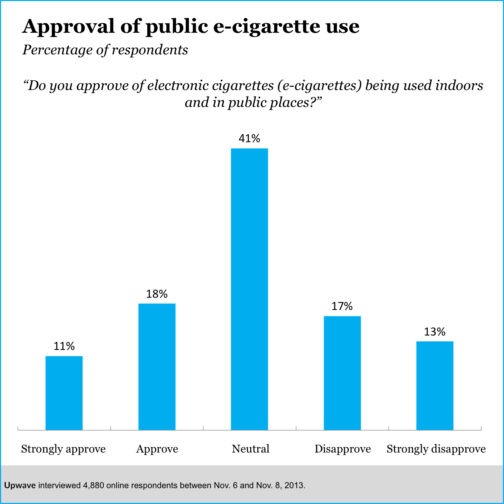 Although the e-cigarette industry is reportedly pushing to separate itself from tobacco products, the data suggests a correlation between the two. Respondents who currently smoke cigarettes or other traditional tobacco products are nearly three times as likely as non-smokers to approve of public e-cigarette use. In addition, smokers are 43% less likely to have a neutral point of view. See the full breakdown below: 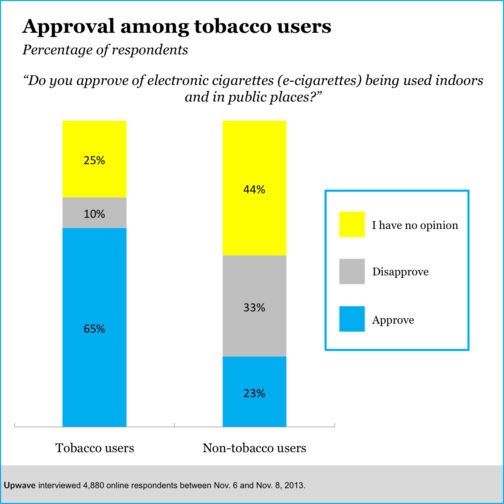 The issue presents an interesting contrast of a modern product with antiquated legislation; while e-cigarettes appeal more to younger consumers, the concept of legally protected public cigarette smoking is thoroughly outdated by comparison. Interestingly, we found the results to be remarkably consistent among age groups. Although respondents age 35 to 64 are slightly more likely to approve public e-cigarette use, approval varies by a few percentage points at most between age groups. 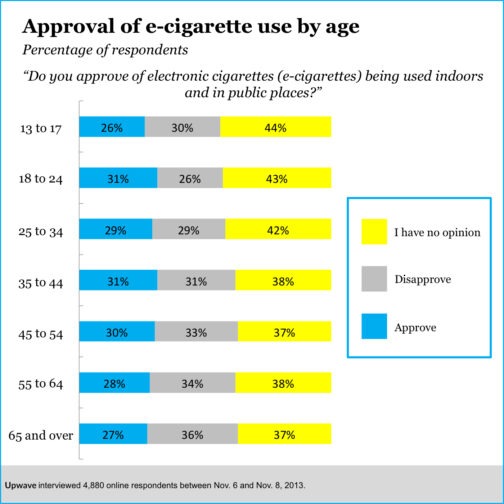 The FDA has yet to rule on the safety of e-cigarettes, and we expect public opinion to fluctuate significantly with such information. The FDA ruling is expected to have a big impact on the industry, as one of the major advantages e-cigarettes have over traditional cigarettes is that users can smoke them in many places where traditional cigarettes aren’t allowed. Until then, Americans appear to be split on puffing in public.
Footnotes for our fellow data geeks