By Austin MoorheadMarch 11, 2016No Comments

Forbes and Wired recently tried an experiment. They asked website visitors using ad blocking software to turn it off – and denied them access if they refused. This was a risky move for a few reasons.

1) The media coverage of this experiment could increase awareness and usage of ad blocking software (our data does show an uptick in consumer awareness)
2) They could accidentally serve malware ads to consumers after demanding ad blocking software be turned off (Forbes has been accused of this)
3) They could lose readers (while ad blocking readers don’t generate ad revenue, they contribute to total page views which still matters to some advertisers)

We asked consumers about ad blocking in November last year, and again last month. Ad blocking software usage has stayed steady at about 9% of total American internet users.1 But our data2 shows that Forbes and Wired have likely helped move the needle on an important metric: intent to start using ad blocking software. 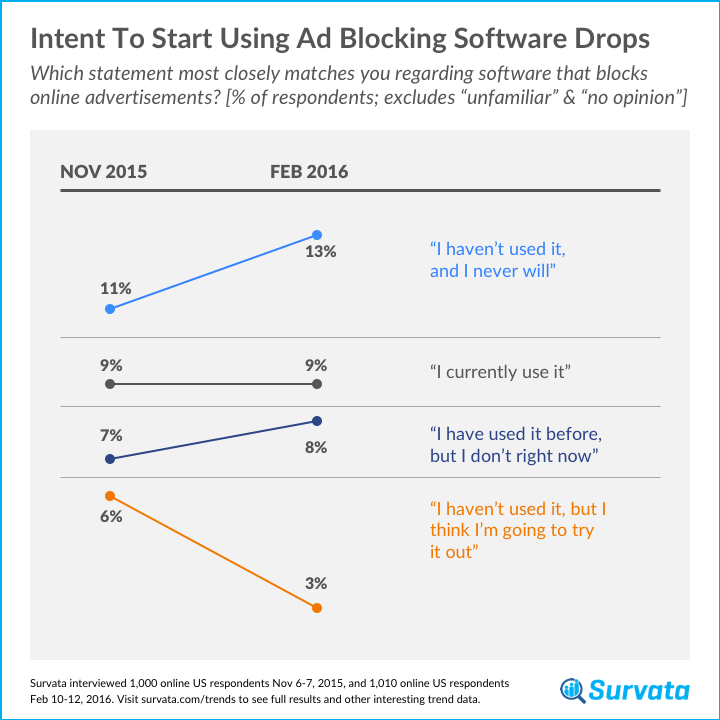 To sum up, though awareness may have ticked up, intent to use dropped significantly. That’s a win for online publishers. Was this a blip or a turning point? Check back with us in May to find out (or add your email address in the box on the right and we’ll send you the next batch of results).

Footnotes:
1. A recent estimate put the US percentage of ad blockers at 15%, though critics have pointed out that the publisher of the data has a vested interest in that number being as high as possible.
2. Chart displays rounded values. The change in “I haven’t used it, but I think I’m going to try it out” is outside the margin of error, i.e., is statistically significant.