It’s no secret that tech companies amass vast stores of user information, from tax records to snapshots of pumpkin spice lattes. What’s more ambiguous is how this personal information is used. And while major Internet companies like Google, Yahoo, Apple, Facebook, and Microsoft publish transparency reports to distance themselves from NSA spying paranoia, companies like AT&T and Verizon are decidedly more opaque.

Given the public discourse on information gathering and transparency, we at Upwave were curious to see which tech companies have garnered trust among consumers. To do so, we used our consumer survey tool to ask 3,175 online respondents to rank a group of companies in order from their most to least trusted.

In tech we trust 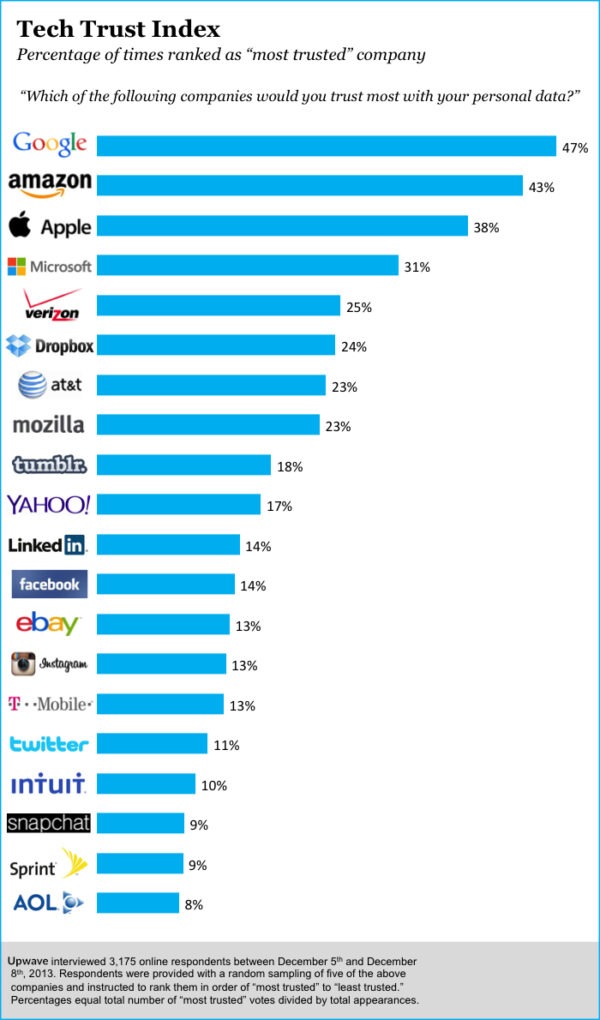 Snapchat is potentially an outlier in our group of 20 companies; because it doesn’t have the massive user base of a company like Apple, Google, or Yahoo, a lower percentage of respondents would have used it. Snapchat also (perhaps unfairly) has a well-documented reputation for exchanging particularly sensitive content (read: “sexting”).

We found it interesting that Google, which arguably holds the largest quantity of information on the average tech consumer, has maintained such a high level of popular trust. Further, we were surprised to see AT&T and Verizon among the top half of most trusted companies, considering they are bucking the trend of data sharing transparency. However, we expect this index (together with the technology of the companies themselves) to rapidly evolve.