The mere mention of mid-campaign reporting and optimization should come with a dose of ibuprofen. Mid-flight insights have long been a headache in the industry, largely because brand marketers haven’t had a viable alternative to legacy metrics like statistical significance.
We all know these familiar frustrations too well. How many times have you seen multiple tactics that are stat sig, or none of them are stat sig, and so you don’t know which to optimize towards? How many times have you shifted budget to a statistically significant tactic, only to discover it didn’t drive lift later in the campaign? Or how many times have you been asked for a campaign update and had to respond, “we have to wait until we reach thresholds needed for statistical significance”?

Luckily, the root cause is simple: advertisers have been using the wrong metrics. Statistical significance was never intended for mid-flight optimization and reporting, and when misapplied, it actually causes more problems than it solves during a campaign.
For one, stat sig does not compare the performance of two tactics — it compares the performance of those exposed to a single tactic to those not exposed at all, to know if the tactic is driving non-zero lift. This makes it the right metric for some decisions, but generally not for mid-campaign optimization decisions when marketers actually need to know: Is a tactic helping or hurting the campaign? In other words, is a tactic lifting the campaign average?
Not to mention, when stat sig is evaluated repeatedly, the chances that at least one of the statistical significance determinations will be a false positive or a false negative increases quickly. This is because during a campaign, the data set is still dynamic as new impressions and outcomes are continuously being collected. While the increase in these error rates is modest when evaluating two or three times whether a tactic is statistically significant, the increase in these error rates is dramatic when evaluating a tactic weekly, for example.

Advertisers recognize the need to shift from error-prone and delayed data to real-time insights that can be evaluated and acted on continuously throughout their brand campaigns.
As the leading analytics platform for brand marketers, Upwave has responded to this need with the industry’s only Optimization Dashboard, which refreshes daily to reveal which targeting tactics – from publisher to audience to channel, geography and more – are most likely to improve or reduce overall campaign performance. These metrics finally make accurate and actionable (and headache-free!) mid-flight reporting and optimization a reality.

The Upwave Optimization dashboard uses a metric called the Outperformance Indicator, which enables marketers to make optimization decisions throughout a campaign, solving the fundamental problem of having to wait for mid- or post-campaign reads. Unlike statistical significance, the Outperformance Indicator can be evaluated and acted on continuously throughout the campaign. 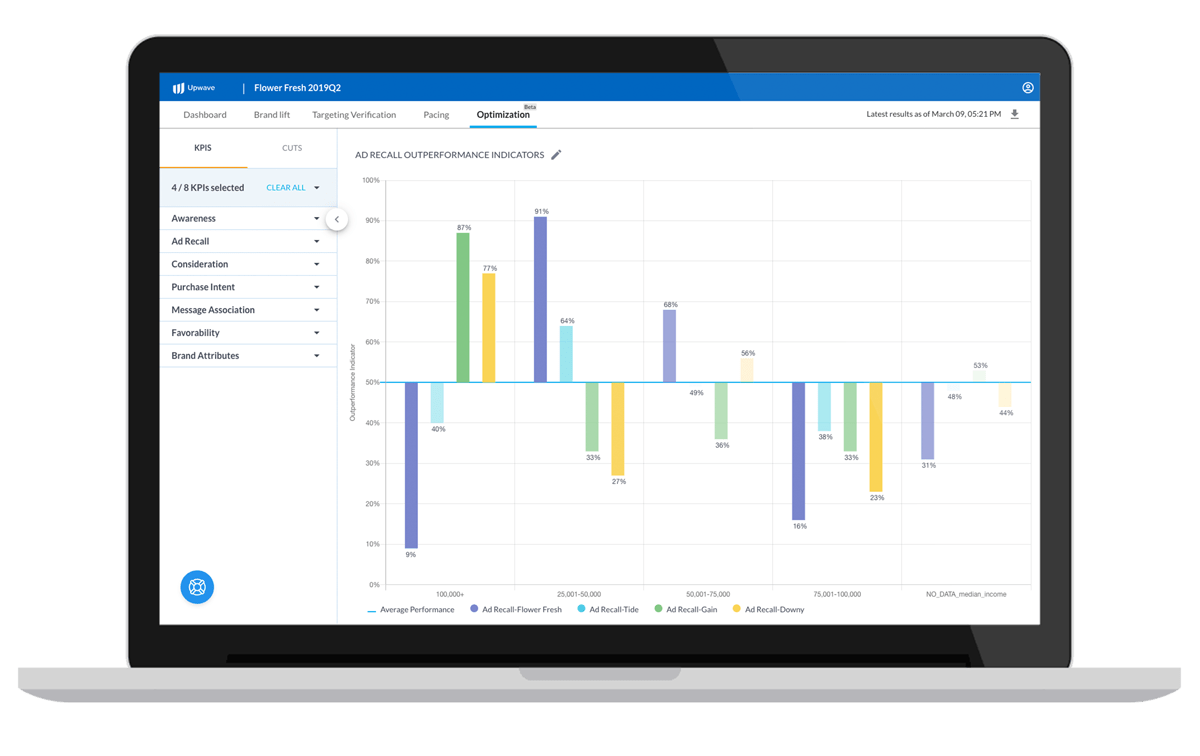 Outperformance Indicators combine observed lift and confidence levels into a single, sortable metric that answers the simple but critical question that matters in-flight: How much confidence can I have that a tactic is helping the campaign, that is, pulling up the campaign average? In essence, this metric helps marketers understand relative performance between tactics – which is what matters during a campaign – rather than isolated performance of individual tactics.
Unlike stat sig metrics, Optimization Metrics like Upwave’s Outperformance Indicator are intended to be checked and acted upon frequently. They also stabilize quickly, so you’re not left trying to explain why data in an earlier report changed significantly later on.

Upwave’s Optimization Metrics empower better brand campaigns by offering actionable insights mid-flight.
These metrics make mid-campaign reporting easier and more accurate. Instead of providing mid-campaign reports with misleading data or simply saying, “we have to wait for more info,” advertisers can confidently address what matters mid-flight. Now, a mid-flight update can look more like:
“We are seeing these tactics outperform the campaign and have shifted accordingly. We’re monitoring daily in case things change. As the campaign progresses, we’ll have an increasingly clear read on the relative performance of each tactic.”
Additionally, Upwave’s Optimization Dashboard provides advertisers with one single, sortable metric throughout a campaign to make gradual adjustments while in-flight. With our Optimization Metrics, advertisers can confidently shift budget to over-performing tactics, modify bid factors in their DSP as soon as possible, adjust and have earlier conversations with media partners about performance, and optimize publisher inventory mid-flight.
Upwave is proud to steer the industry forward with this latest innovation, helping advertisers continue to make the most of their brand campaign investments. Stay tuned for our upcoming Expert Update to learn more about our intuitive Optimization Metrics!