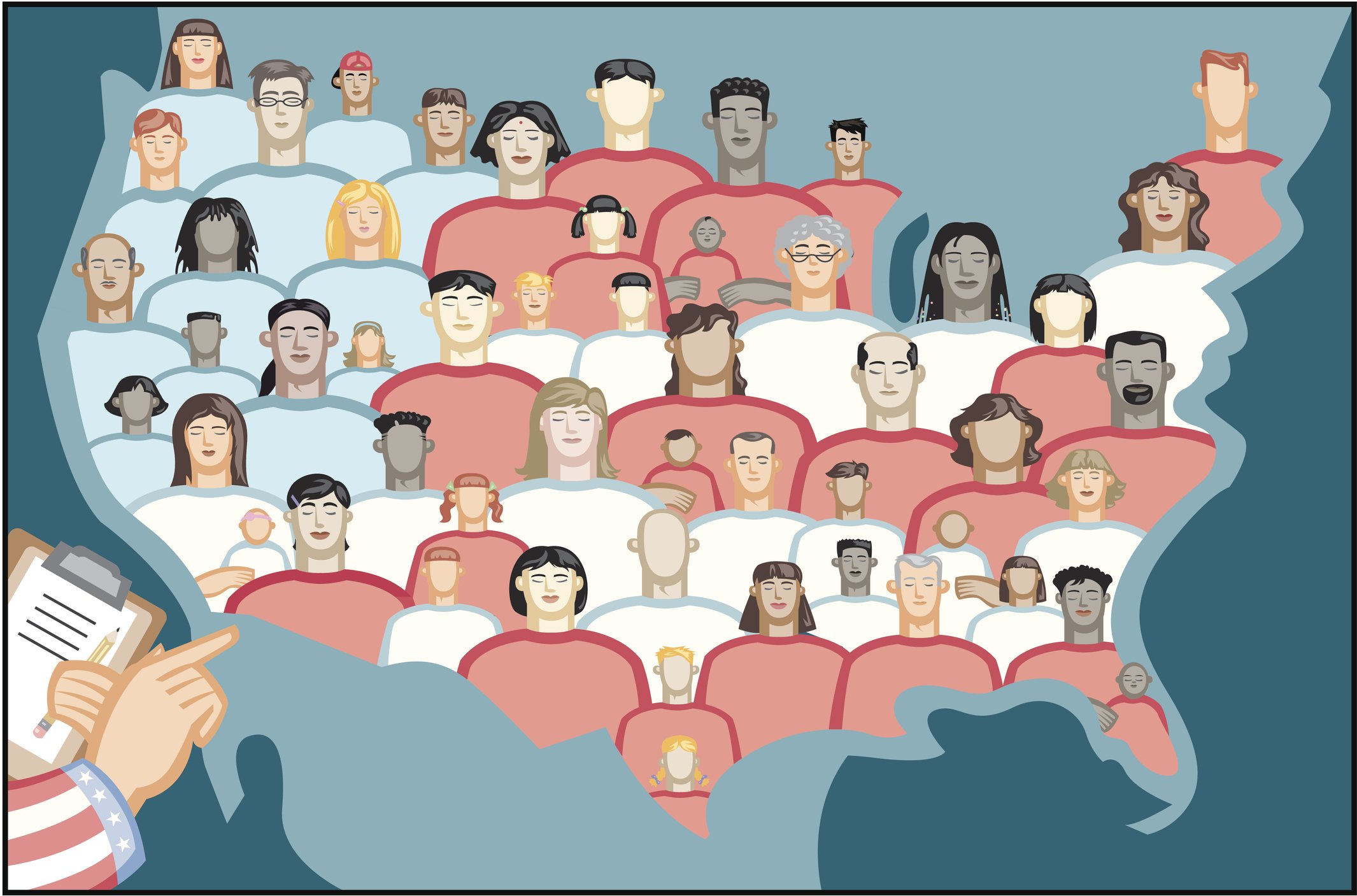 How We Ask About Gender Matters

Survey research relies on the U.S. Census Bureau for sample weighting. Currently, the U.S. Census Bureau only uses binary male and female gender options. To combat this, Upwave and its customers have partnered with Queer the Census to advocate for an inclusive gender identity question in the Census to better-reflect the needs of trans and non-binary people through surveys like this. Want to help? Read on to learn how.

One of the ways Upwave collects consumer data is through the use of surveys. Surveys are used across society as a basis for making innumerable decisions that shape people’s lives. From how we allocate public resources (the Census & social science research) and apportion political power among and within states (Census)—to how we design products and services people use (quantitative market research)—to how we advertise those products (advertising research). Our lives in a fundamental, yet hidden way, are structured by surveys. When marginalized groups are excluded from surveys due to biased survey or sampling design, we are perpetuating structural injustice.

For the millions of non-binary people in the world—that is, people who do not identify as either male or female—the seemingly simple request to “select gender” can be impossible to answer. Gender identity is multifaceted and dynamic, and when survey researchers measure gender as binary, we not only create another marginalizing experience for a non-binary person, we also exclude their attitudes and opinions from the thousands of decisions made based on survey research.

According to one study of surveys used in psychology research—a field we would consider to be on the front-lines of inclusive survey designs—86% of surveys measure gender as a binary construct. What does this mean? The most obvious cases are when we ask a survey respondent whether their gender is male or female. Less obvious, but perhaps even more discriminatory, are surveys that add third options such as Other or Prefer not to say. By framing additional gender identities as abnormal or not to be shared, these surveys also measure gender as a binary construct.

Why are the hundreds of public and private organizations that administer surveys still measuring gender as a binary construct? A major factor is that the U.S. Census Bureau continues to use a binary gender question in the decennial Census and the American Community Survey (ACS)—the two largest (and the only two mandatory) surveys conducted by the Federal government. Because data from the U.S. Census Bureau is used to ensure representative samples in many other surveys, and because these surveys are seen as the norm for questionnaire design, researchers are left with no good, inclusive options.

What you can do

Here are three ways that together, we can make a difference:

Arm ourselves with knowledge

We must educate ourselves about the ways that socially constructed data, including gender data, systemically marginalizes entire populations of people. A book that has influenced Upwave’s thinking is Data Feminism by Catherine D’Ignazio and Lauren Klein.

Donate to orgs positioned to fight for inclusivity

Upwave is partnering with Queer the Census, a campaign housed at the National LGBTQ Task Force that advocates for an inclusive measure of gender identity in the Census and the American Community Survey (ACS), mandatory national surveys that collect data from more than two million households each year, through financial support and Leadership Council membership.

“Our Upwave partnership is the type of educational campaign that demonstrates to the Census the broad public support for inclusive measurement of gender.”

Upwave encourages you to support Queer the Census. If you are a customer, we will match your contribution! Contact your Customer Success Manager to learn more.

Use your surveys for good

If you are a researcher or procure research, use your survey to educate. This is the only responsible use of a survey instrument that otherwise would be just one of the many daily experiences of discrimination for those with marginalized gender identities. The following is the new Upwave measure of gender identity: 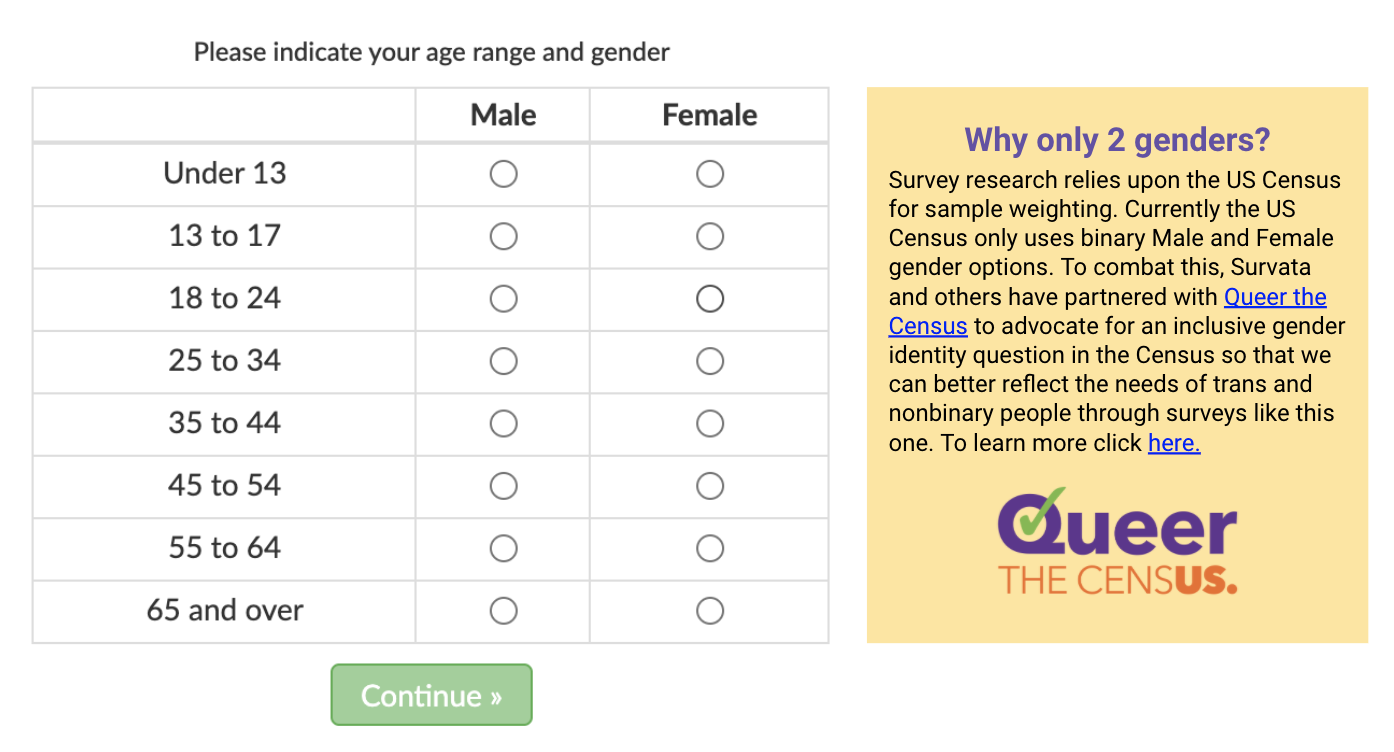