When Will Americans Give Up Car Ownership?

Based on their most recent investment round, Uber is worth more than Ford. GM just invested $500 million in Lyft. Google’s self-driving car recently crashed into a bus, and in a few years there will be millions of self-driving cars crashing into buses globally.

It got us thinking here at Upwave… does anyone even drive anymore? So we’ve been asking consumers about cars. It turns out the vast majority of Americans still own a car, but we’ve found an interesting group: the 45% of American car owners who would be willing to give up car ownership. The implications of this are huge. What could cause it? It differs a bit by age, as you can see in the chart below. 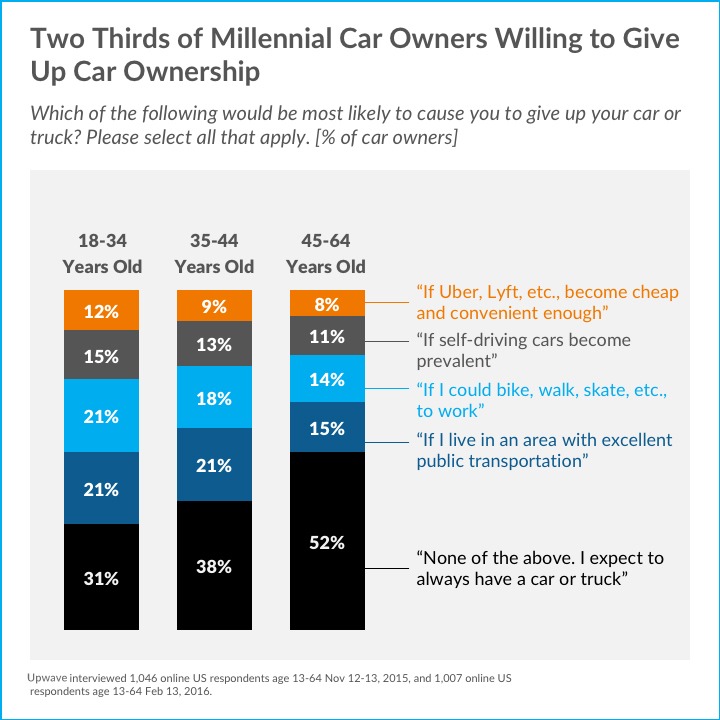 How weird is it that self-driving cars are ahead of ride sharing as a reason to give up car ownership? When people want to be driven around… most prefer that a robot do the driving. Frankly it’s a sensible risk assessment, and anything sensible on this topic is a relief after how many people have lost their minds over Uber.

We expect consumer perception to be an important influence on the politicians and bureaucrats who will decide who self-driving cars should be programmed to kill. We’ll keep our finger on the pulse.